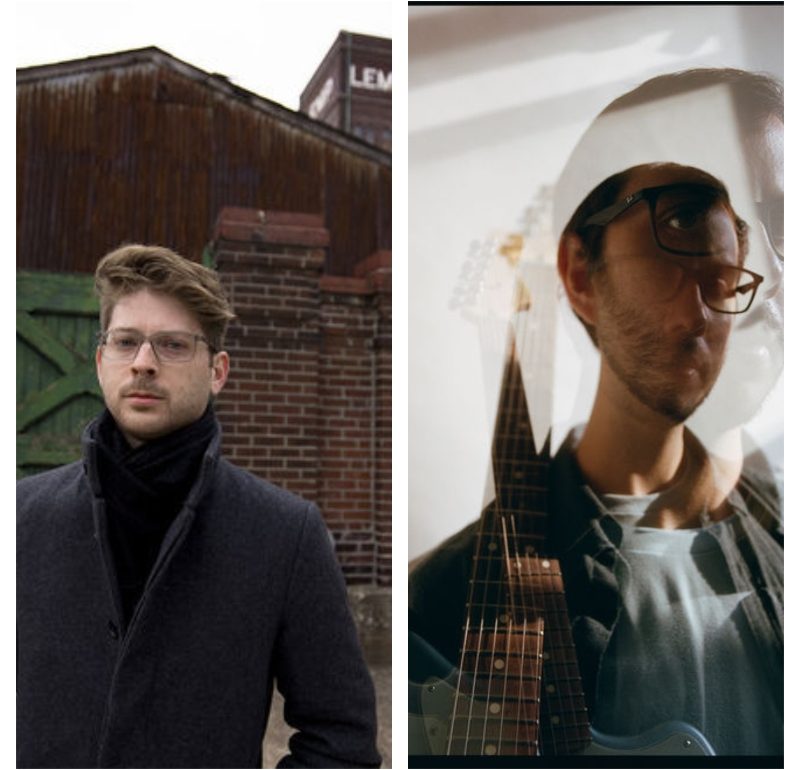 If you are going on a 7-day voyage to unexplored territory, sonic or otherwise then friendship & trust are fundamental. Fortunately, Colombian Jan Esbra & American Greg Dallas’ decade-long personal affection, musical admiration, electronic curiosity and improvisational leanings born from their jazz guitar roots were all steady hands on the rudder during this intense & unpredictable creative outpouring. Remarkably they travelled light, only utilising a synth, an old piano and two guitars – all fed through various effects pedals which largely disguise their identities. Even more remarkably this is Greg’s debut and Jan’s sophomore LP.

After the 7th day, they rested, divided the recordings equally and retreated to their respective St. Louis and New York studios to contemplate what had just happened. Listening back to the various 20-30 minute long sonic outbursts that were the basis for each track, they painstakingly distilled the essence of each session & staying true to the improvisational guiding spirits immortalised in the recordings, arranged those “duende” moments into the tracks you are now hearing. Greg then embarked on his first foray into mixing – treating it as an extension of the artistic process and further elevating the tracks to create the jazz-rooted electronic collages you have before you.

The album is certainly a communal triumph and a welcome antidote to today’s fast-paced and increasingly divided world. It’s a safe space where North & South America unite, New York and St. Louis nod approvingly at each other, improvisational embraces intentional, sonic density sits comfortably next to barely tangible musical meditations and jazz teams up with electronica to push the boundaries of ambient music. It’s certainly a trip and a half.

Ultimately though a long, well-nurtured friendship has born some pretty mind-blowing musical fruit and they’d like to share it with you.

Greg Dallas, a St. Louis native, has been enamoured with music from a young age. Raised in a home supportive of art and creative endeavours, he tried several instruments before meeting his match, the guitar. Soon after discovering his love for the guitar, he began performing frequently at local venues. Like many young guitarists, he was inspired by such greats as Jimi Hendrix, Stevie Ray Vaughan, and Jimmy Page. During high school, he found himself attracted to the virtuosity of jazz guitarists, which eventually drew him to study at the prestigious Berklee College of Music. Upon arriving at Berklee, Greg was confident that such a diverse and talented community was the perfect place to continue to grow and learn. At Berklee, he was afforded the rare opportunity to study under the tutelage of some of the world’s greatest musicians and professors, like Tim Miller, David Tronzo, and Tia Fuller. His time at Berklee was formative and life-changing in many ways, beyond just his musical development. After years of hard and rewarding work, he graduated in 2015 with a Bachelor’s Degree in Performance for guitar.

Since Graduating Berklee, Greg has moved into the world of songwriting, as well as being an active member of the New York jazz community. Influences can be heard from many directions in his songwriting, from Radiohead to Wayne Shorter. It combines the sensibility of lush modal jazz harmony with a familiar and relatable songwriting structure. The COVID-19 pandemic has had a tremendous effect on the life of possibly every single person on the planet, and Greg is no exception. During the course of the pandemic, Greg relocated to his home town of St. Louis. In an effort to turn a tough situation into a blessing, and feel less motivated towards making music during the pandemic, Greg turned to visual art. With no formal training, his personal style is simultaneously intuitive, detailed, vibrant, simple, and complex. Alongside practising his musical craft, he has a steady stream of commissions and pieces done purely from pleasure flowing out of his studio. The pandemic has presented an opportunity to grow as an artist, albeit not at all how he expected. Greg’s goal is to make music that is uplifting and relevant, drawing from his education and the deep, evolving tradition of American music, and to create art that evokes any feeling that is able to be stirred in the viewer.

Jan Esbra is a New York City-based Colombian guitarist and composer known for his “mesmerizing soundscapes and innovative ideas”. His debut solo album entitled “Temporary Objects” was released on August 27, 2021, and is a collection of improvisations using guitars, samplers and various effects pedals.

His sophomore release Confluence is a collaborative project with St. Louis-based musician, producer and visual artist Greg Dallas and will be released on November 17 2022 via The Slow Music Movement.

Aside from his solo work, Jan has released music with his bands Jade Collective and Bird Lite and has worked with Becca Stevens, Ben Wendel, Catey Esler and Eva Gertz.

Jan has a Bachelor’s degree in Jazz Composition and Music Business from Berklee College of Music and participated in the 2020 New Amsterdam Composers Workshop.